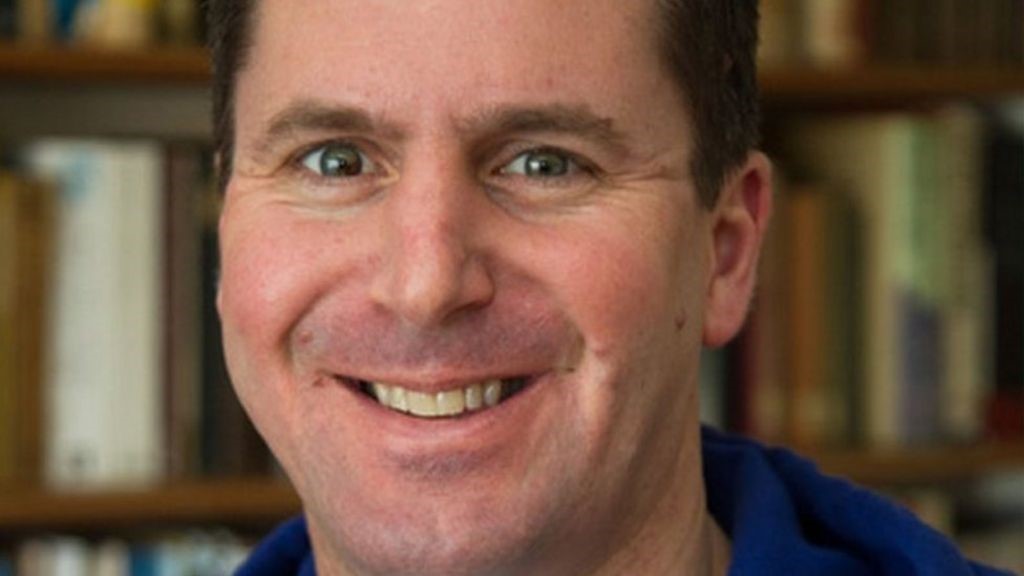 On presenting Cymdeithas Waldo’s first virtual Annual Lecture on September 24th, the guest lecturer deftly argued that Waldo’s poems are a means of upholding the individual’s health and wellbeing. A timely concept on considering the effect of the covid epidemic.

Ceri Wyn Jones insisted reading or listening to poetry was as good as any means of dealing with personal turmoil. One does not have to depend solely on tablets or medicine. He referred to a multitude of poets who strive to reach and convey that state of ‘total stillness’.

And that was never easy in Waldo Williams’s case as he testifies in the poem ‘Cwmwl Haf’ he said. He struggled with his own difficulties. But managed to overcome. The national bard referred to a mother who whispered a poem by George Herbert, ‘The Flower’ in her daughter’s ear who was receiving treatment in a mental hospital. The words emphasised the possibility of renewal and re-birth. He also referred to his creative kindred from Cardigan, Aneurin Meirion Jones, who said Waldo’s volume, ‘Dail Pren’ is “forever evergreen and a solace in dark times”.

During the lecture the poet and Meuryn from Cardigan referred to poets such as Seamus Heaney, R. S. Thomas, John Donne, William Wordsworth, T. Gwynn Jones, W. B. Yeats, Emily Dickinson, W. H. Auden, Robert Frost, Simwnt Fychan, Iolo Morgannwg, Dic Jones and Kendrick Lamar. And Waldo was of the same stature as them all. And even as he acknowledged that Waldo could be obscure as he endeavoured to express himself Ceri Wyn emphasised there was strength and solace in many of the individual lines.

“Even those parts that are far from crystal clear can excite and mesmerise. Waldo is one of those poets who can mint truths, even if the reader cannot quite grasp their meaning, or even know for certain whether they are true or not. I don’t quite know the meaning of the line ‘Daw’r Brenin Alltud a’r brwyn yn hollti’, but, dear me, it certainly makes my hair stand on end whenever I hear the line.”

He placed the young American poet, 23 year old Amanda Gorman, in the same light, as he quoted from her poem ‘The Hill We Climb’, delivered on the occasion of the inauguration of Joe Biden as President of the United States, and by doing so bidding farewell to Donald Trump.

That certainly put the lid on the argument that poetry contributes to the health and wellbeing of the individual. A total of 98 people had registered to listen to the lecture via zoom, many were based outside Wales.  The title of the lecture was ‘Red Storms of Life’: Waldo, Poetry and Health and Wellbeing). The expression ‘Red storms of life’ is Rowan Williams’s translation from the poem ‘Between Two Fields’. The event was organised by Cymdeithas Waldo in conjunction with the Welsh Department at Aberystwyth University.

The full version of the lecture can be heard here.  https://www.youtube.com/watch?v=JOsKfCpR7-4 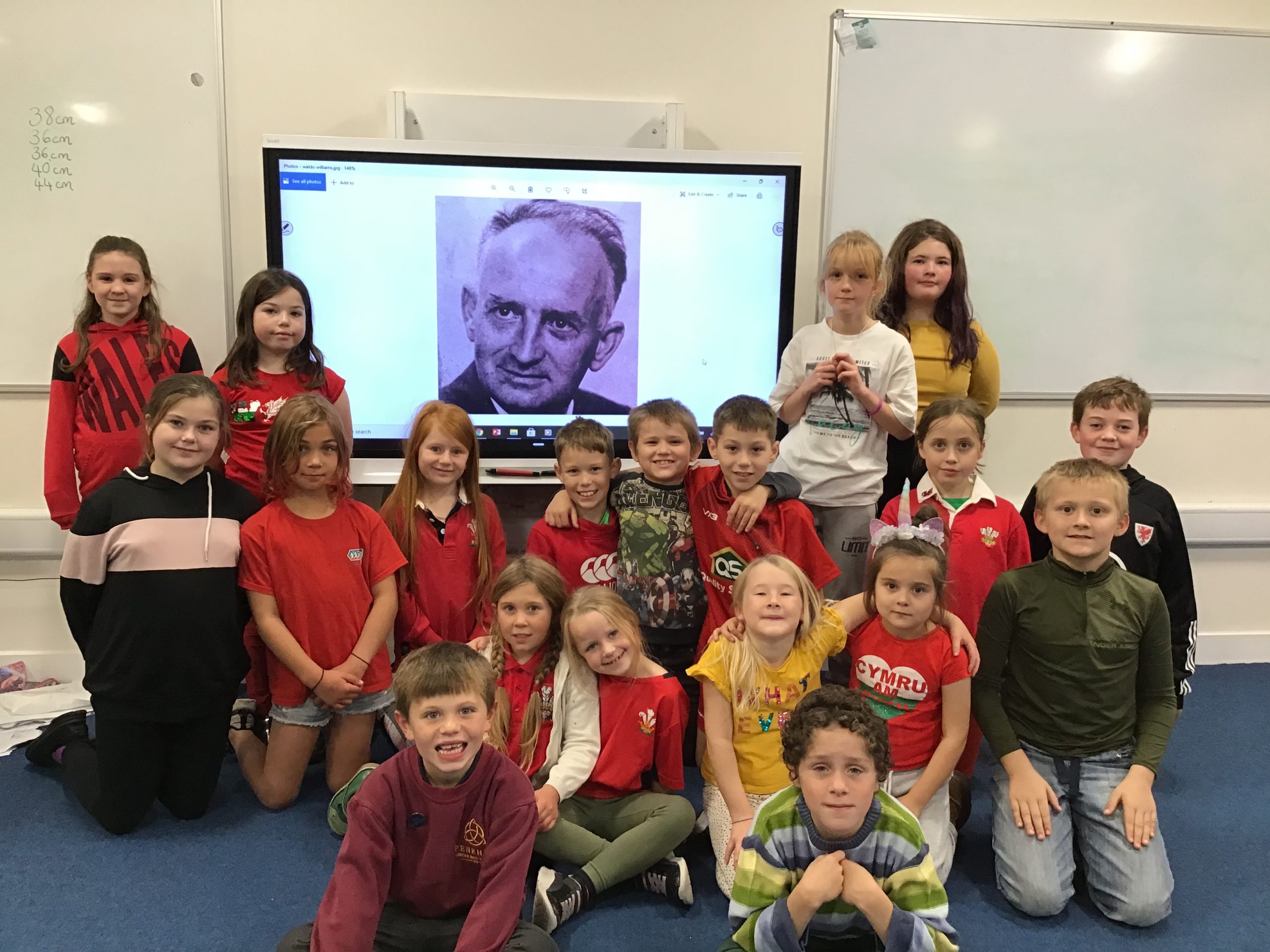 Ysgol Penrhyn Angle, beyond Pembroke, celebrated Diwrnod Waldo by inviting a Cymdeithas Waldo representative to talk to some of the pupils and emphasise the local connection with Hoplas farm and the poem ‘Cofio’. But they almost knew more about the poet on the screen than the envoy, Hefin Wyn, himself. It was a joyous occasion. And by the way if the new build school had been built some fifteen years ago no doubt it would have been called Angle Peninsula School.

Also to coincide with Waldo’s Day (Diwrnod Waldo) on October 30, Tecwyn Ifan released a cd titled ‘La Santa Roja’ on the Sain label.  The shadow of Waldo hangs heavily on the content just like the Preseli mist. Several songs refer directly to Waldo and two of which were composed by Cymdeithas Waldo’s Honorary President, Mererid Hopwood.  ‘Longing is an act of hope,’ said Tecwyn, on explaining the motive behind most of the songs. 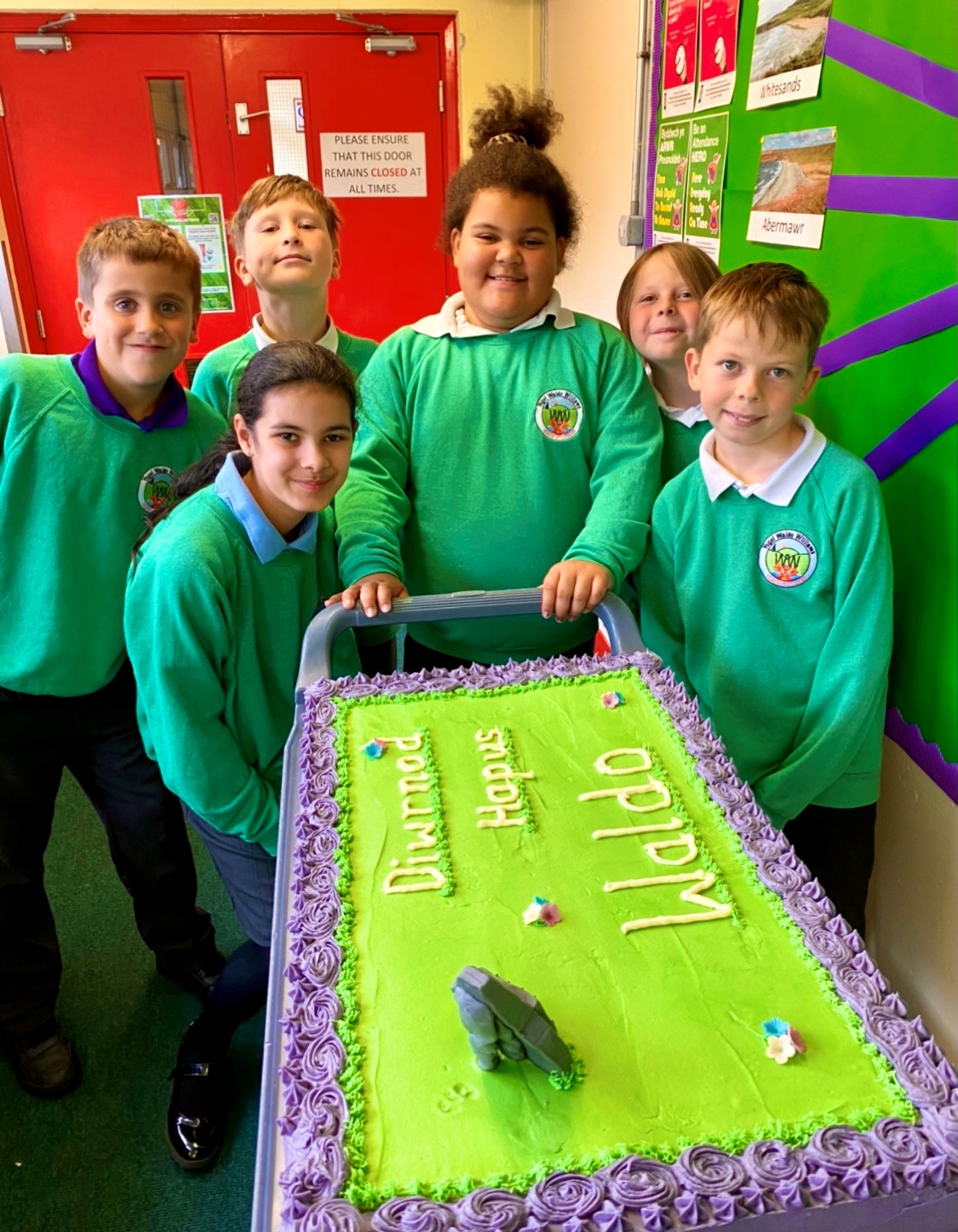 On the same day pupils from Ysgol Waldo Williams School, Haverfordwest, prepared a huge birthday cake for Waldo. He was born 117 years ago.  According to the Head, Mrs Cora O’Brien, naming the school after the poet gave the school community a wonderful sense of belonging.

“A day doesn’t go by in our school without us considering what he stood for in terms of what he valued and in terms of what he contributed to our Welsh cultural heritage. He truly was an inspirational figure and continues to inspire each one of us,” she said.

And a book entitled ‘Dilyn Waldo’ (Following Waldo), by National poet Eirwyn George, has been published highlighting events associated with Cymdeithas Waldo since its formation ten years ago. The cover picture by Scottish artist, Tim Fudge, ‘Preseli Landscape’ is particularly striking and the content diverse in the best textbook tradition.

Quotes from lectures held are included as well as reference to the plaques unveiled – thirteen of them at places connected with Waldo including Llŷn Peninsula, St Davids and Kimbolton as well as the Preseli hinterland. The author says in his foreword to the volume which costs £7; “I heard someone ask recently is there much more to be said about Waldo. Asking whether the day has come for Cymdeithas Waldo to cease. No, Waldo continues to open new doors – and windows as well.”

The book has been published by Cymdeithas Waldo and is available in most bookshops. Or else contact alunifans@hotmail.com

Meanwhile, the ‘Waldo Ribbon’ day proved an outstanding success on Thursday 20 May this year. That was the day when Waldo died 50 years ago. All those who admired his work were encouraged  to write their favourite line on a piece of paper to be hung with a string on a tree.

The symbolic act brought to mind the explanation why he named his only volume of poetry ‘Dail Pren’ (Leaves of a Tree).  He found the expression in the Book of Revelations  “and the leaves of the tree were for the healing of the nations”.  And somehow Waldo himself saw each of his poems as fertile leaves that would heal his nation.

Several schools chose lines from his ‘Cerddi’r Plant’ (‘Children’s Poems’) which he published along with his friend, Llwyd Williams. And some trees were adorned with colourful ribbons such as this one at Ysgol y Frenni, Crymych. 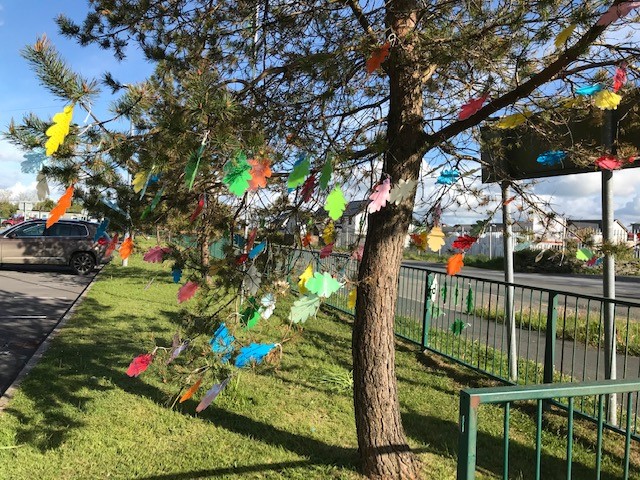 The pupils even produced a video of their day’s activities which can be seen here  https://fb.watch/5MMw4hrDG8/  on the school’s facebook page. Pupils of  Ysgol Llanychllwydog in the Gwaun Valley, where Waldo taught for a short while, adorned the trees in a nearby wood; 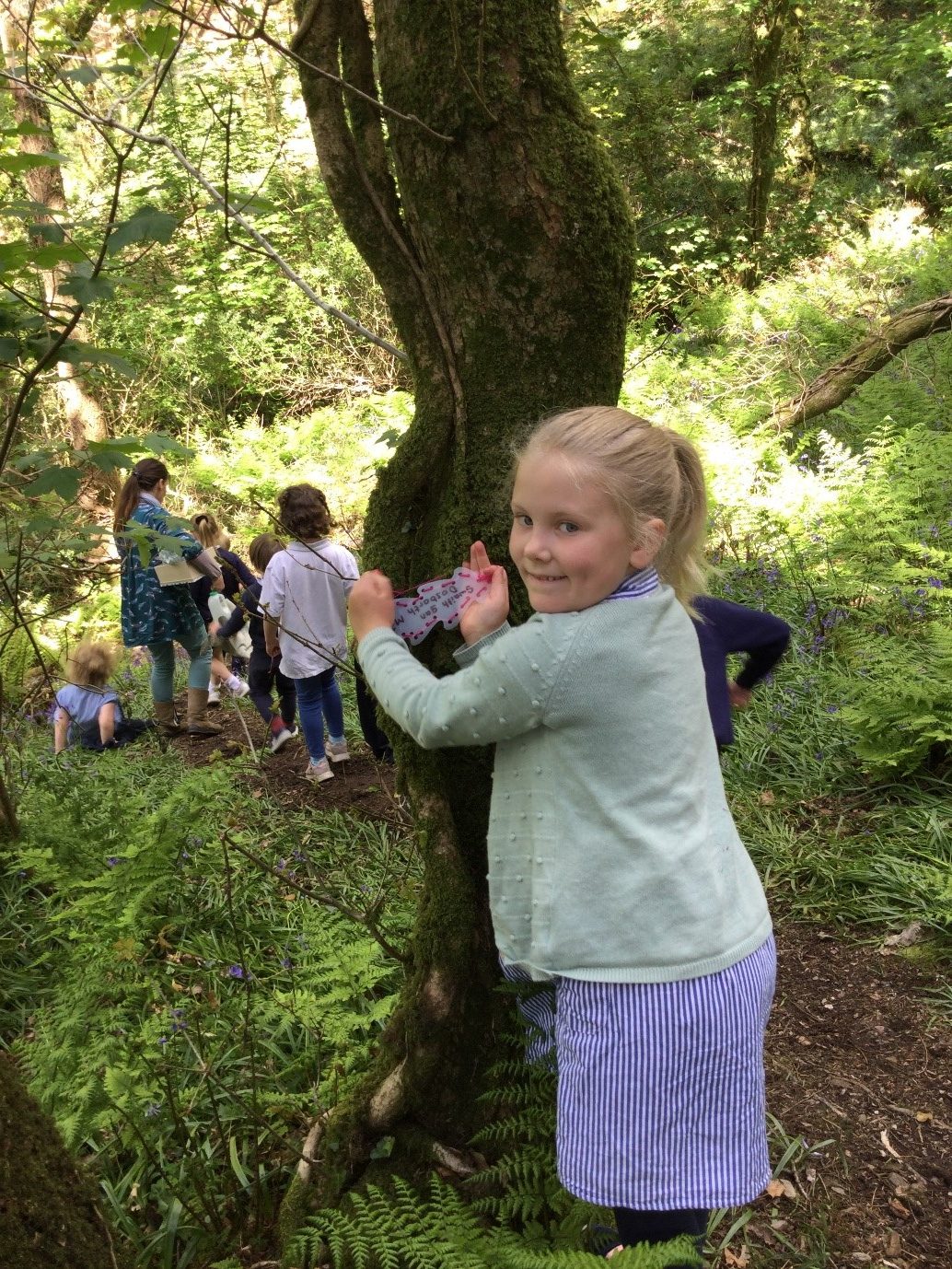 The best ideas are always the simple ones. We are indebted to a Cymdeithas Waldo stalwart, Alun Ifans, for suggesting tying ribbons to commemorate Waldo’s death, with some indirect help from novelist, Martin Davis, in whose novel, ‘Ysbryd Sabrina’, one of the characters ties a message to a tree.

One of the most unexpected places where the ribbons were tied was Rhoscrowther near Pembroke. That was particularly apt because Waldo composed the poem ‘Cofio’ (Remembrance) at Hoplas farm nearby.