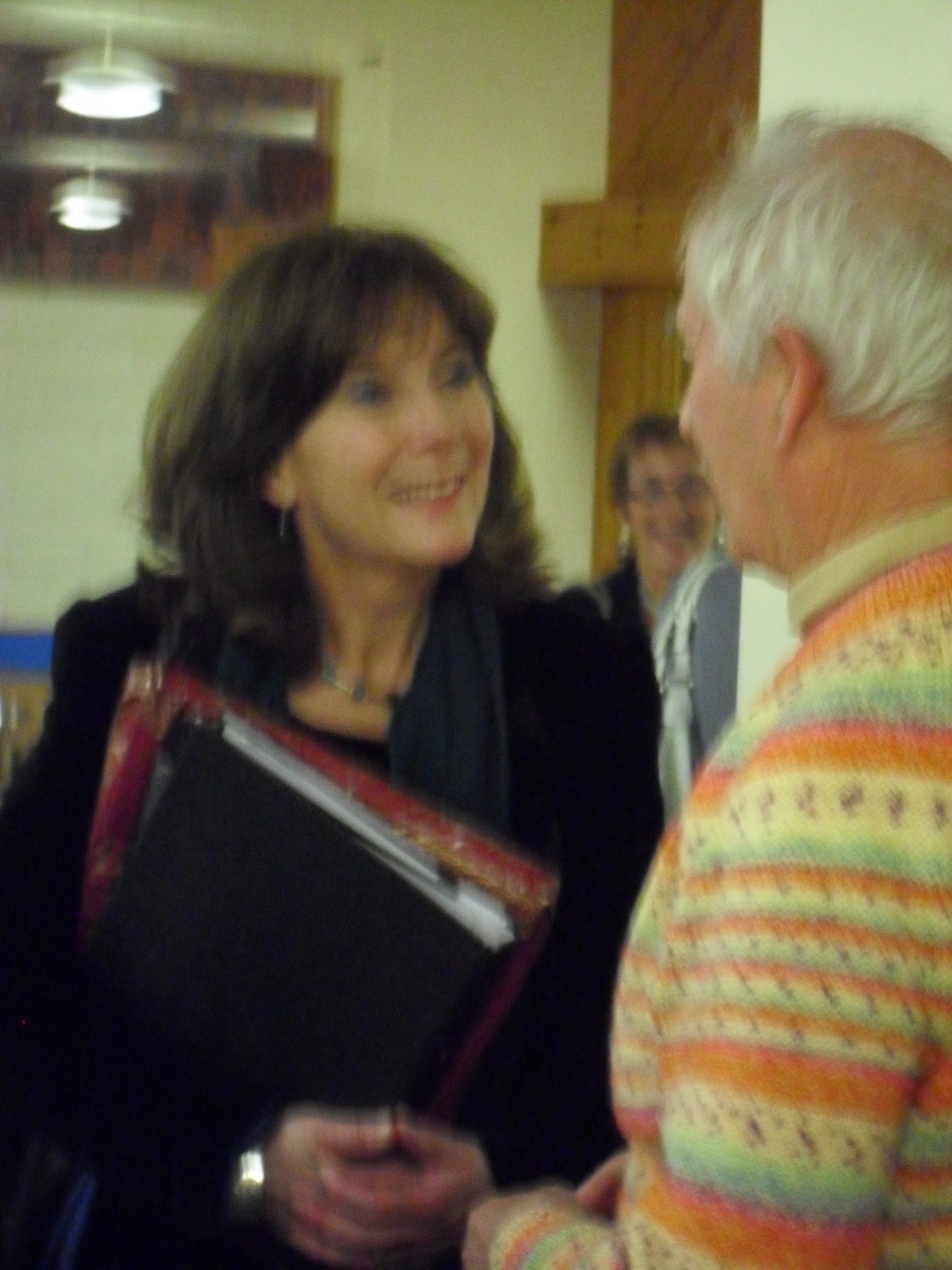 Waldo Williams would not have approved of the ‘Big Society’ concept of the Tory Party, according to Mererid Hopwood, as she delivered Cymdeithas Waldo’s Annual Lecture.

As she analysed the sonnet ‘Cymru’n Un’ (Wales as One) she described the alternative society or neighbourhood the poet had in mind compared to what the prime minister, David Cameron seeks to establish.

Mererid referred to those words she considers to be ‘bleeps’ embedded in the sonnet to help us decipher its meaning. One such word is ‘cyntedd’ (passage) which led Waldo into Wales and to an acquaintance of the country through his own family ties at Bangor, Hiraethog and the Black Mountain before he found himself in his favoured Preseli where, according to the lecturer, ‘everything made sense’.

The national bard emphasised how Waldo found a neighbourhood, deemed to be a much richer concept than society, among the people who tilled the land because as the soil is worked there is always a taking and giving. Mererid felt the bard believed it was possible for all of us to embrace this wondrous neighbourhood if only we searched diligently for its presence within ourselves.

The term ‘dryllio’r rhod’, (wrecking wheel), in the latter part of the sonnet, she explained, was a reference to those spoilers who oppose the formation of a pure Wales; those who are boastful and full of empty rhetoric often based on military victories without witnessing the order that will be established on passing through the ‘long passage’.

Reference was made to the frequent usage of the word ‘adnabod’ (recognition) throughout Waldo’s poems and its importance in understanding his train of thought. “The word” she said “is synonymous with awen (spirit or muse) that will save us all, will raise us and pull us all together. It means much more than the casual ‘How are you today?’ as it enables us to dig towards the roots underneath all branches in order to recognise the deepest root.”

As such she echoed the nub of the Archbishop of Canterbury, Rowan Williams’ lecture to Cymdeithas Waldo earlier in the year. He mentioned the concept that we are all brothers to one another and by delving towards the roots by means of the awen in order to truly recognise each other there will eventually be an end to all wars.

The beauty of the sonnet according to Mererid is the last line, ‘Gobaith fo’n meistr: rhoed Amser i ni’n was’ (Let Hope be our master; and let Time be our servant)- which was chosen as the title of the lecture – because it reveals Waldo’s absolute certainty that Wales one day will be one neighbourhood.

“There will be moments of light that will give us compassion and mercy both inside and outside of the passage. The ‘wrecking wheel’, currently at work in Wales, will be outwitted,” she said.

She mentioned the moment of light that will befall us when the Queen will no longer be regarded as the head of the Church and the military services. She referred to the incongruity of professing allegiance to the Prince of Peace and the mayhem caused by armed personnel.

Further more she explained that erasing such an anomaly would be part of the process of establishing a kingdom on earth. In time she said such anomalies would be undone.

Indeed, on listening to the powerful lecture, a moment of light that came to many in the audience was the realization that the current efforts of Mererid and the Society of Reconciliation to broadcast an advert advocating peace on S4C was part of that process.

Similarly the Quakers’ intention to read Waldo’s poem ‘The Peacemakers’ at an open-air service in Narberth on a Saturday morning early in November in remembrance of all who have died in wars is part of the same process. 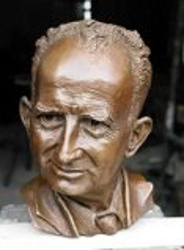 Prior to the lecture a bronze bust of Waldo, made by the sculptor John Meirion Morris was unveiled by Gerwyn Williams, one of Waldo’s nephews, to be kept at Ysgol y Preseli. On receiving the gift the headmaster, Mike Davies, gave a geographer and an educationist’s analysis of the poem ‘Preseli’ and its place within school activities.

One of the joys of the evening at Theatr y Gromlech, Crymych, on Friday, 28 September 2012 was the number of people who had travelled long distances to be present from the Llŷn Peninsula, Mold, Bala, Cardiff, Pontarddulais, Bargoed, Ysbyty Ifan, Bedford and London without forgetting the gentleman who had travelled in a taxi all the way from Hirwaun; Berian Williams was Waldo’s chief chauffeur when he stood as Plaid Cymru’s first candidate in Pembrokeshire at the 1959 general election.

Waldo must have an unusual hold on the hearts of many Welshmen even well after forty year’s since his death. The evening was brought to an end by a rendition of the ‘Tangnefeddwyr’ (Peacemakers) poem by the Crymych and District Choir.

The following day many people took part in a sponsored walk from Carreg Waldo to Llandysilio arranged as part of Huw Roberts’ three day charity walk from Milford Haven to raise money for Heart Research Wales. Pilgrims were even taken across Parc y Blawd and Weun Parc y Blawd by Vernon Beynon before retiring for tea at Nant-y-ffin Motel.